The first painting I sold on ebay

I wanted to share with you the story of my first painting sold on ebay. It was back in 2001, and I was selling my handcrafted jewelry here in toronto. I decided I would try selling it on ebay also. I did, and it was going along fine. Then one day, I stumbled upon the art section. It was so new back then. There wasn't even a name for it. I remember it was just under "antiques and art". There was no "self representing" or "direct from artist" back then. I think ebay thought of art as in" old antique paintings". There were just a handful of artists selling their own paintings on there at the time. Sitting at my computer, I looked up on the wall and saw the painting I had done a year before of my cat bailey. It was just an experimental piece, and at the time I wasn't too attached to it. So for fun, I listed it! Here is a picture of the painting: 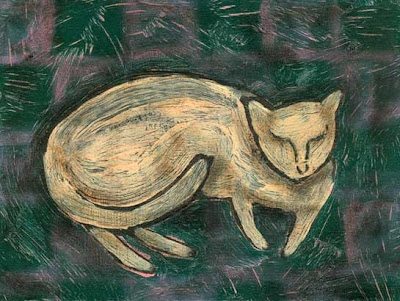 It sold, and I thought to myself...maybe I should paint more and do less jewelry making. So I did. I used my cat Bailey as my inspiration and made many paintings based off of her daily activities. Here is a picture of Bailey: 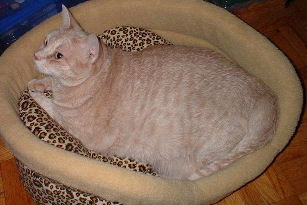 Bailey was like my business partner. She gave me the ideas, and I would paint them. She was very special to me. Then in 2003 she was diagnosed with diabetes. I devoted my time to taking care of her while still painting. I gave her insulin injections every 12 hours, everyday. She passed away in 2006. It was one of the hardest things I had to go though.

Fast forward to 2007. I was in an Apple store and went over to the computers they have hooked up to the internet. I wanted to check on how my auctions were doing. Instead of going into my account, I simply typed in "TASCHA ART" to do a quick search for them. To my surprise listed on ebay was the first painting I ever sold! The one of Bailey was up for auction! I could actually get it back!!! This was 6 years later folks! Can you believe it! I won it, and it is proudly hung back up on my wall. It is a great tribute to Bailey.
Here is a very small sample of some of the paintings inspired by bailey
Posted by tascha at 8:11 PM

What a great amazing story. Im so glad you got to have your first painting of Bailey back. It would be extra special now. You have quite a history Tascha! It is inspiring for someone like me who is just starting out. Thanks for sharing this :D

It amazes to see how much your art has morphed into your own unique style since that first Ebay painting. And how totally awesome that you were able to buy it back! I love that such things are possible.

That is a wonderful story Tascha. It reminded me of when my doggie Chorizo was sick and I had to give her the lung medicine she needed twice a day. A breathing appartus that I held over her mouth and sprayed the mist so she could breathe better. It's very sad when you family pet member leaves you. How wonderful that you got back the original of Bailey. What a great tribute to your baby. Thx for sharing.

That was awesome of you to share that story. I also had to look at all your art from the past 7 years. Really neat to see how you style has evolved.


I am way too new at my art. It will interesting to see it in 5 years from now.

That's the first time an Ebay story every made me misty-eyed! I'm tempted to think that Angel Bailey was looking down that day and wanted to surprise you with a little gift--almost as good as a dead mouse!

Wonderful paintings and my favorite subject, cats:)
The ones of Bailey are all the silly things my cat does, loved seeing them.

That is one of the greatest stories I have ever read!

Fantastic story,i'm so pleased for you that you got the painting back, it would be such a special thing to have!

Sweet Bailey! What an emotional story, Tascha. And I loved your series of paintings inspired by Bailey, they made me smile:) Thanks for a great start of the day!

Thank you so much for sharing that "tail"! I agree with everyone, it is so cool to see how your style has evolved over the past few years. I think that your original inspiration was the purrfect subject....love that Bailey! I am a total orange tabby cat fanatic.
xoxo

What a great story! How lovely to have it back and a nice remembrance of Bailey. That is how I started selling art on eBay too. My first painting was a fish and the second was a cat. I remember that there would only be about 150-200 listings. Not so now:))
Cheers, Shelagh

What a sweet story! I'm so glad you got your painting back.

What a great way to start the day... reading this wonderful story.
Thanks for sharing Tascha.

Yowzers! I just went back for fun to look at your other Fliker albums.
Could it be true? You've done over 600 painting??!?!?!?? Dang! Whoa!
Now THAT is an inspiration. You deserve another coat. Go back and get the red one too.
I think my Muse is back. It just kicked me in the butt! :)

Awww~what a touching story. Yes, saying goodbye to a furry child is so hard. We had 3 cats all the same age who lived til their late teens but then all crossed over the bridge within a few years of each other~sniff. Of course we went right out & adopted 2 more! How special you got your Bailey painting back! I'm sure he had a hand in that (or paw)! ~ Jill

OH! what a lovely ending to such a great story! I too started listing on ebay in 2001.
how fun that you got your first painting back. That is just great!

Hey! great story. Glad you have your your first painting back...must feel super!

Perfect...Bailey just wanted to be back in your life...precious story!
Thanks for sharing.

A great story Tascha. It's fun to see how much your style has changed through the years.
Someone contacted me a few months back to tell me one of my Great Garndfathers paintings was on Ebay but I was too late. I'm glad you got yours back!
Happy Valentine's Day!!
Tracy

How incredibly inspiring. I'm still searching for the courage to attempt selling mine. Maybe that time has finally come!

Tascha, this is such a super inspirational story. What a beautiful friendly cat you owned. That you have painted you friend and you get to keep your first painting.
Wow, you have been selling art since 2001. Fanastic!

Tascha,
I feel compelled to write and tell you of our similar experiences. A month or so ago I was looking at pictures of your white cat and I thought, "Oh, that looks like my Vladimir," who is also a lovely all white cat. Then tonight I see a picture of Bailey and I can't believe it. About eight yeears ago I had a cat named Sammy who looked just like Bailey and he too had Diabetes. I had to give him insulin shots twice a day. I hardly went anywhere because of the structure I needed around poor Sammy. One night I attended a party at my friend's house for a couple hours, only to return and find Sammy in diabetic shock laying on the floor. I rushed him to the emergency room, but they said he would not make it and that I needed to put him down. It was the hardest thing I have ever done in my life and I lived with the feeling that it was my fault for going out that one night. I know it wasn't because he had just been to the vet's that day and I fear they didn't check his levels properly, but it took me a long time to get my next cat, about four years, and only did when I was asked to rescue him as he was abandoned at my niece's vet office. Now I have Vladimir, my white cat, and I'm so glad I do. Anyway, it just amazes me at the similarities in our stories.
Susan G

Thank you all so much for your comments!
Susan G, I am so sorry for your loss. Treating diabetic cats is a very difficult thing to do. It took a large toll on me. I was in constant fear Bailey would go hypoglycemic. She would get me up every night for a snack at about 3am. I would jump out of bed because I was so worried she was going hypoglycemic. Then there were the worries of ketosis. So it is such a double edged sword. Too much insulin is bad, and too little is bad and it is always changing.
I am sure you did a great job. It is just such an unpredictable disease.
I understand how you feel.

What a cool story, Tascha! Your journey is really inspirational. I remember finding you on Ebay about 4 years ago or more and it took me forever to get an original that I could afford.

I'm glad you have Bailey's portrait back. It's part of the scrapbook of your journey and relationship.

awww deat, what a story!! good to hear you got back a little part of bailey :)
*hugs*

Wow what a neat story.I know it's sometimes hard to part with the things we make.
Andrea

Oh Tascha, how I loved Bailey and her story. Each of the paintings I own of her are so cherished. I was delighted that you happened upon that original painting; it was kismet...maybe a gift from Bailey, even.

I've been doing a bit of painting lately and haven't had time to check in with all my favorite blogs so I was thrilled that I dropped by in time to see this entry. Thank you for sharing it!

What a wonderful story! You inspire me Tascha, and I really love your art.
Thanks for sharing!

You're work sure has evolved, Tascha. :)
Didn't know that's what happened to Bailey. All I knew was all of a sudden there was Opie.
How exciting you got your painting back! Bet it almost feels like having a part of your old friend back :)