Have you ever wrestled a sofa?

Four years ago I decided I wanted a sectional sofa. A nice big sectional that would be comfortable for both me and my boyfriend. That it was. I would lay on one of the sides, my boyfriend on the other. But the sofa was so large that it took up half the room. I remember the struggle the movers had when they delivered it! They *barely* got it threw the door. My angel kitty Bailey would scratch at it. Since she had diabetes, I let her do whatever she wanted. The arm rests became slightly tattered.
Then I got Lily and Opie and they couldn't resist but scratch it too. It got a bit ridiculous looking after a while. I decided I just had to get rid of it, and buy something smaller....with less...scratch-ability.
My boyfriend and I wrestled this sofa out of the apartment today. And by wrestling, I mean drop down, wrestle. The sofa won.
We got ONE side of the sofa out...the other side refused to go. We paid the maintenance man to come up with a sledge hammer and break the sofa in half. It finally gave up and we wedged it out. Bye bye monster sofa.
Posted by tascha at 1:06 AM 9 comments:

I've been tagged by the FABULOUS Chris Stott to give 5 ART FACTS about myself. I will then tag someone and so on and so on.

1. I paint mostly in the evening. After the city has gone to sleep.

2. I graduated from the Ontario College of Art and Design in 1997.

4. Lately I listen to Joel Osteen's CD book while painting.

5. I always finish a painting in one sitting. I don't like going back and working on art after I started it. My mood may have changed and the style might not be consistent

Now I am going to tag Christine Clemmensen to tell us about her 5 art facts!
Posted by tascha at 8:29 PM 2 comments: 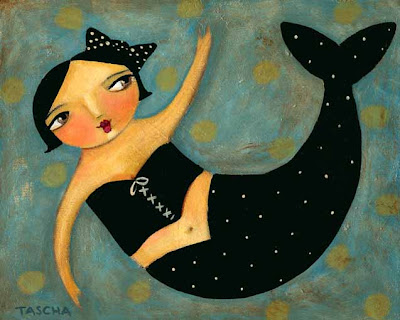 Here is my newest Mermaid. She's a little bit sexy, isn't she? This one has a very vintage feel to it.

She's up for auction on EBAY
Posted by tascha at 2:45 PM No comments:

Oh happy day! I was on the front page of etsy! 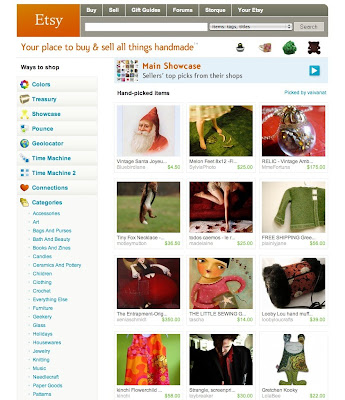 The sweet Paulette at PauletteInsall sent me a message letting me know I was on the front page of etsy! There is my wee little "Sewing Girl" print in the middle.

I was choosen by vaivanat to be in her treasury. 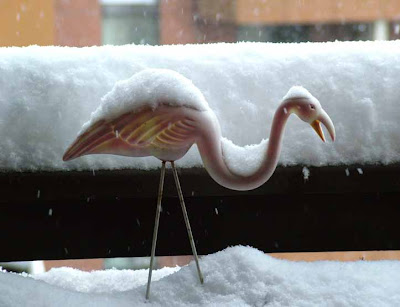 Today I woke up to a winter wonderland. I snapped this pic of my little pink flamingo out in the window box. (I've had that flamingo for about 10 years. I got him at a dollar store and he has sort of become my mascot for the summer)

It was all white out today. I couldn't see across the street. It has since eased up a bit. I'm thinking of going out and getting a humidifier today. Should I make the trek?
Posted by tascha at 1:23 PM 6 comments:

Baby it's cold outside!

Well, there is a BIG STORM headed our way. Usually Morgan and I go to the grocery store on Sunday...but the news warned people to stay in tomorrow. So we went today :)
After grocery shopping we went out to do some Christmas shopping. We walked. UGH! One step forward, two steps back. It was so slippery!
I brought my camera along with me and I held the camera at arms length and snapped this shot of us out at Dundas Square.
(We're both a bit frazzled!) 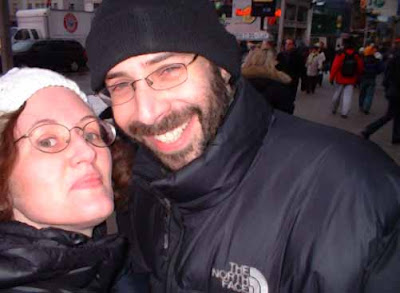 We took the subway home because we both were too cold to walk back.
Brrr~
Posted by tascha at 4:33 PM 2 comments:

And the winner of the earrings is.....


This is a how to video on how to make some simple earrings. +PLUS I draw for the winner of yesterday's draw!
Posted by tascha at 10:33 PM 6 comments: 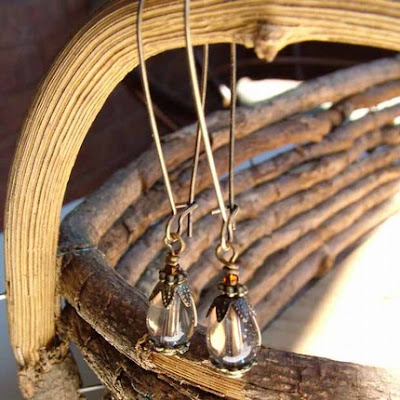 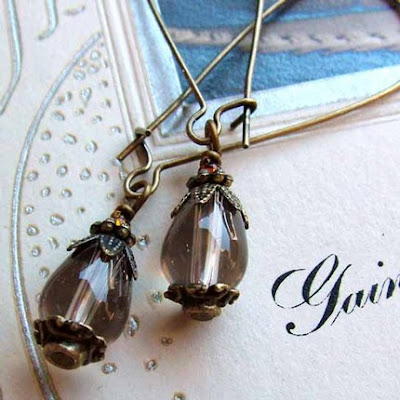 Yes? Well, they could be yours!


Yep, I'm having another draw!

I just LURV to give stuff away.

Leave me a comment on this post, and on Thursday night I will draw for a winner.

Okay I'm going to draw the name of the winner. Stay tuned!

My mom was in the paper! 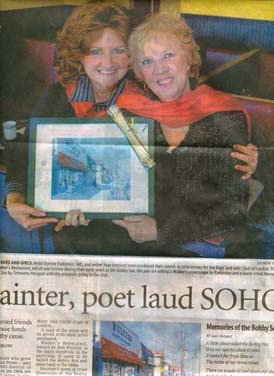 My mom Bonnie (the lady on the left) decided she wanted to give back to the community she grew up in. There is a community center now in the area (The Boy's and Girl's Club) that gives kids a place to spend time and do crafts. My mom decided to raise money for the organization by doing a painting of the main street. She is framing the prints and selling them with 100% of the money going to The Boy's and Girl's Club. Her highschool friend Joan helped out by writing a poem about the neightbourhood which will be given with every print. 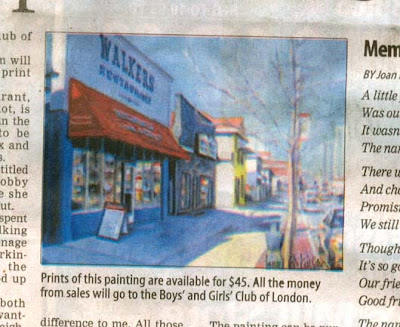 This is a picture of the painting....the newsprint from the paper makes it hard to see.
If you are in the London Ontario area, stop by Walker's restaurant on Wellington St. and pick up one of these prints! It's for a great cause!
Posted by tascha at 9:38 PM 3 comments:

Season's greetings! Sorry I haven't been updating as much as I should. I've been busy getting ready for Christmas. I've managed to do a few cute paintings to end the year off with.
This one is now *sold*: 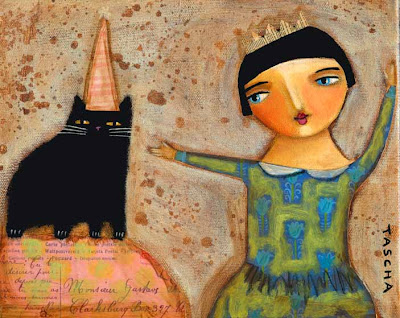 I've added a print of the darling "sewing girl" located at my esty shop. 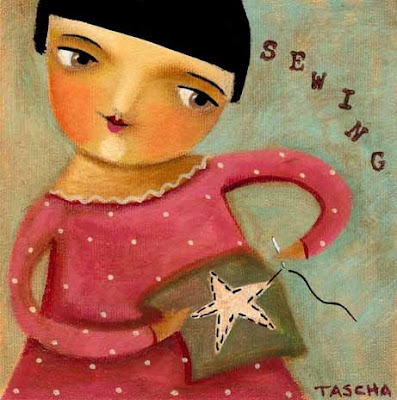 I should be making a new video soon!

Lookie what I found on etsy! 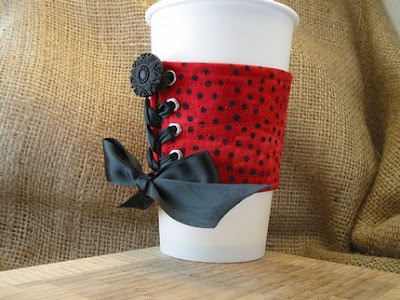 I was looking around on etsy and found this sweet coffee corset that was inspired by my ladybug painting! Of course I just had to buy it! It was named after me! I am going look pretty darn cool whipping that little number out at Starbucks :) ...I don't usually go to Starbucks...but now I will have to with this sexy cup corset!

You can find Jenn's coffee corsets at Jenngee on etsy!
Posted by tascha at 12:21 AM 2 comments: 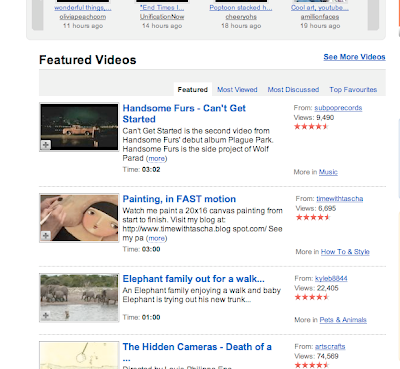 I was wondering the other day why my one video (Painting in fast motion) was getting so many hits.....then I realized that YOUTUBE CANADA had featured me on their front page! Now it has moved down to about the middle of the page. I guess it gets knocked down one spot each day. I'm up to over 13,000 hits! A bunch of sweet comments too! I'm still not 100% comfortable in front of the camera, but I hope that will continue to improve. Thanks to everyone who has subscribed to my channel! xoxox
Posted by tascha at 9:15 PM 9 comments: 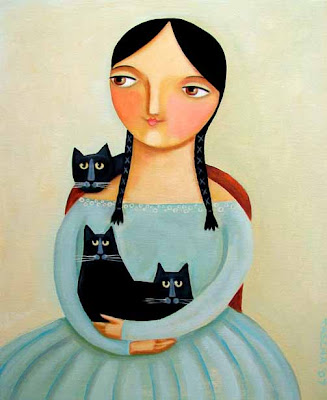 I painted my newest painting a couple of days ago. I am just so in love with it. It has such an "old fashion" feel to it. Yet it also has a very flat graphic look too. The colors are nice and mild. Oh and the kitties little faces make me smile. It's one of my favorites :)
Posted by tascha at 9:03 PM 9 comments:

And the winner is... 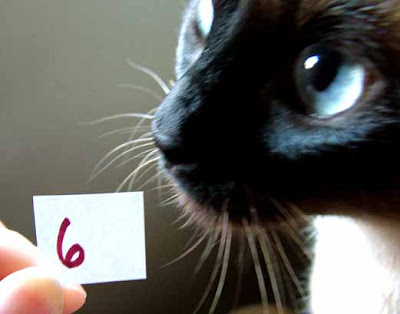 Today I numbered all the entries 1 - 18 and put them in a hat (I'm too tired to write everyone's name down:)
I drew number "6" which is the blogger named "why" :)
I have contacted "why" and will await why's address to send the sketchbook.

A BIG THANK YOU to everyone who entered. I hold these draws every once in a while so don't be discouraged if you didn't win today, there is always next time.

Have a happy Tuesday!
Posted by tascha at 2:08 PM 5 comments: 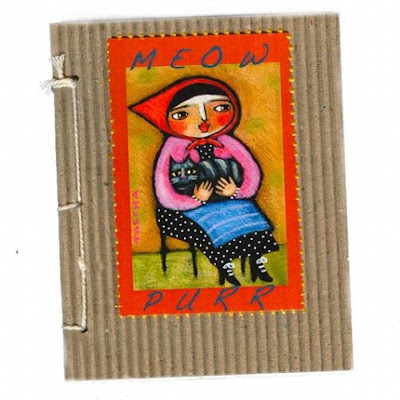 I'm having a draw for this wee little sketch book that has a print of my Babushka and Cat prints on the front of it.

Just post a quick message and on Tuesday I will draw for the winner. I don't think I will be video taping this draw, but I will post the winner on Tuesday.
*** This draw is now closed ***
Cheers!
Posted by tascha at 10:00 PM 18 comments:

Playing with paper and crayons!

It's 5:15 am and maybe I should think about going to bed soon hum? I've been up all night getting this crazy video made, and I'm not sure it even makes any sense! LOL! Oh well, it is mildly entertaining if anything.