Out for a WALKIES! 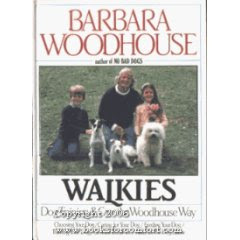 Back when I was a teenager, we had a Bichon Frise dog named Basil. As a family we tried to learn everything we could about raising a dog. There was a TV show on at the time called Training Dogs the Woodhouse Way, starring Barbara Woodhouse.
This was long before the days of Cesar Milan! Barbara was an older English lady, like a grandmother of sorts who really understood dogs.
She always used the term "Walkies" when it was time to take the dog out. We taught Basil "walkies" and he never forgot it. 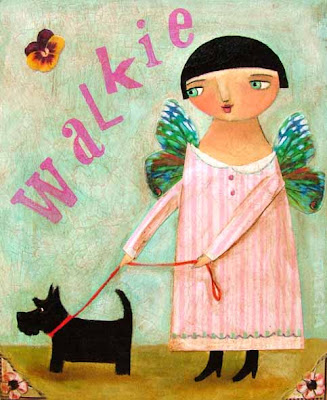 I did a painting with a Scottie Dog going out for walk, and I printed "Walkie"....without the "s", partly because I ran out of room for the "s", and partly because this is a new era....an abbreviated decade. Plus, let's face it, we only have time for one walkie, and that's all.

WALKIE Can be purchased at auction or "buy-it-now" on EBAY
Posted by tascha at 8:21 PM